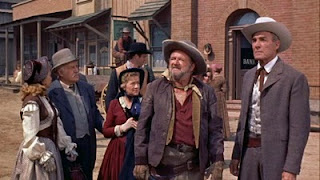 Westbound was the sixth of seven western films starring Randolph Scott and directed by Budd Boetticher. While most consider it a part of the Ranown Cycle, Randolph Scott's partner Harry Joe Brown did not produce this and Burt Kennedy did not write the story.
The story is set in 1864 and involves gold shipments by overland stagecoach from California to Colorado which will then be sent to the East to support the Union war effort. Randolph Scott stars as Captain John Hayes who battles Southern sympathizers who want to stop the gold.
As Captain Hayes makes his away across country in a stagecoach he comes upon another beautiful girl (Karen Steele) hooked to a plow, which Randolph Scott seems to do pretty consistently in this series. And is also often the case the strong woman has a weak husband (in this case because he lost an arm during the war). When Jeanie's Yankee husband Rod Miller, gets called out in town, Jeanie defends him and then John Hayes steps in.
The bad guy, Mace, who works for Confederate agent Putnam, is one of those complex Ranown bad guys. He also steps in to defend the lady.
Rod tries, but has trouble handling a gun and working with horses around the house. Meanwhile, John Hayes is trying to make sure he gets the stage line running to bring the gold in. He is planning to use the Miller's ranch as a station on the stage line.
Putnam's men steal the horses, John and Rod go and get them back. Putnam's men come back and take the horses again. This time they shoot Rod, who was standing in the doorway and Rod dies.
When Putnam's wife, Norma, who is Hayes former lover says she is leaving Putnam, the plot starts to get complicated. It looks like John Hayes now has two women.
In the last scene Hayes goes in to town looking for Mace. Unlike, other Ranown shown downs this one has a group of Mace's men coming for Hayes first. the people of the town then come out and help Hayes. Putnun also comes out to help Hayes. Mace starts to ride out of town and Hayes guns him down. Not your typical heroic show down. Putnam hass also killed in the gunfight.
Which woman will Hayes take? He looks at Norma as she is about to head off on the stage, and then back at the window where Jeanie is. He pats Norma on the arm and leads his horse towards Jeanie. He tells her he will look in on her from time to time and he will make it soon.
The strength of the Ranown Cycle movies was the simplicity in the plot. This movie was flawed a little by the subplot that had Hayes and Duggan's wife as former lovers. It wasn't needed and actually hurt the movie. When you have a bullfight you don't bring a second person into the arena.
But, overall, still a really good movie.