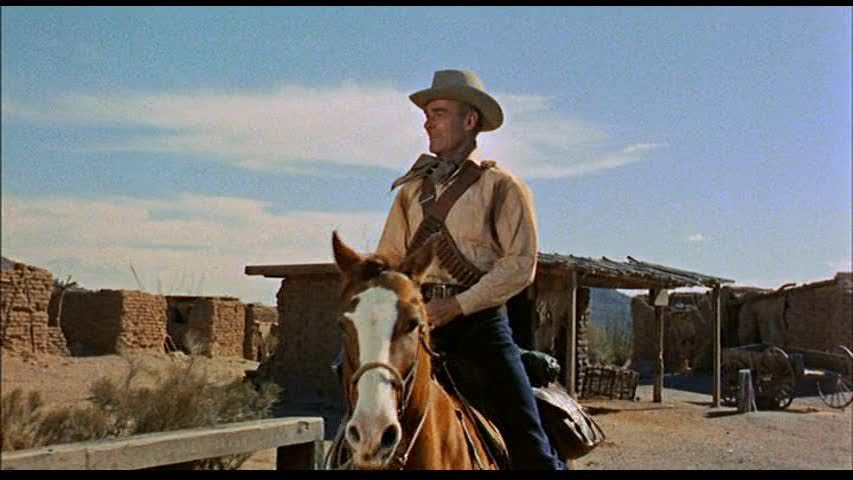 On his way home to West Texas, Tom Buchanan rides into the Californian border town of Agry. The Agry family includes the mayor, the sheriff and hotel manager. Each is out to see how much they can make. When a young Mexican comes in and shoots down a member of the family, Buchanan helps save him from getting beaten.
Buchanan and the young Mexican, Juan de la Vega, are almost hung but saved when one of the Agrys thinks of a way to make money off them. A jury lets Buchanan off but Juan is convicted. The Sheriff lets Buchanan go but keeps his $2000. The Agry brothers fight over who is going to ransom Juan back to his family. Greed is the name of the game. Buchanan leaves town but goes back for his money and Juan.
This movie is a little different from others in the series, There is another "respectable" outlaw, Carbo, but the movie has a comic tone wandering around the fringes. The Agry brothers are more buffoons then desperadoes. Buchanan is a little like Pat Brennan, in The Tall T in that he was just going along, minding his own business when trouble found him and he then thought he had to do the right thing and get involved.
It might be possible that Akira Kurosawa, who liked American Westerns, may have seen this movie before he wrote a similarly themed Yojimbo two years later. Clint Eastwood's Western A Fistful of Dollars was later based on Yojimbo. The comic elements and buffonery were also evident in those two movies.
Not my favorite in the series, but still a pretty good movie.