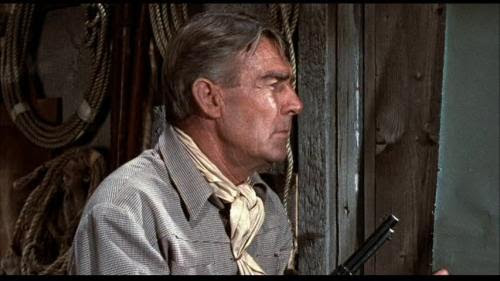 Bart Allison meets his friend Sam and travels to Sundown just in time for Tate Kimbrough's wedding. Everyone in town seems to have a pretty high regard for Tate but Bart holds him responsible for the death of his wife, three years earlier.
At the wedding, Tate's dance hall girlfriend sits in the front row and Bart stands in the back. When asked if there were any objections to the wedding Bart speaks up. He says to the bride: "If you marry this man you'll be a widow by sun down."
Bart and Sam then get pinned down by the sheriff's men. Lucy, the would be bride, leaves the church and the wedding is temporarily off while she tries to figure out what is going on.
This movie is a different from the two previous ones in the series. In this one it doesn't seem Randolph Scott's character has any respect for the villain. In the previous two movies he had regrets about cutting them down.
When Sam finds out that Bart is going to kill Tate because of something that happened to Bart's wife Mary, Sam is disturbed. Later Sam tells Bart that Mary wasn't the woman Bart thought she was and Tate wasn't the first man she was with.
It seems the villain isn't as much of a villain as he first looked. Again Boetticher humanizes the villain. Things aren't as cut and dried as it originally looked. Maybe it is Bart who is in the wrong. When Sam gets shot down by the Sheriff's men, he asks the Doctor to tell Bart that Mary was no good.
The Doctor gives a speech in the bar telling the people they need to get their town back from Kimbrough. The people in the town, including Lucy and her father, begin to wake up.
The flawed hero, Bart Allison, has a shoot out with the Sheriff and guns him down but he cuts his gun hand but he still wants to get Tate Kimbrough. Kimbrough straps on a gun and comes out to meet him. Before they get to meet, Tate's girlfriend Ruby shoots Tate to save him, so he won't get killed. Ruby and the Doc tell Bart that his wife was no good, she wasn't worth it. Kimbrough rides out of town with Ruby while Bart drinks at the bar.
Bart then rides off into the sunset with Sam's horse trailing behind.
Posted by Jack at 11:02 AM