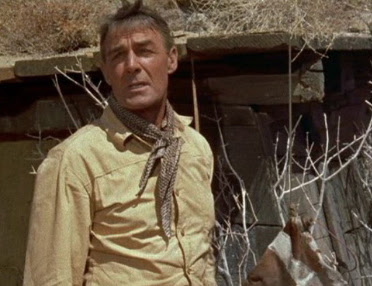 The first movie directed by Budd Boetticher, produced by Harry Brown and starring Randolph Scott,   The screenplay was also wriiten by Burt Kennedy, based on a story by Elmore Leonard.
The movie opens with Pat Brennan (Scott) riding among the rocks and the mountains. He is riding to the outfit he used to work at, to try to buy a bull for his new ranch. He lostes his horse in a bet and he hitches a ride with a stagecoach carrying newlyweds, Willard and Doretta Mims (Maureen O'Sullivan). Doretta was "scheduled to be an old maid until Willard came along. She;s as plain as adobe wall", said Ed Rintoon (Arthur Hunnicutt).
At the next station the coach and its passengers fall into the hands of a trio of outlaws headed by a man named Usher (Richard Boone). Chink, played by Henry Silva is a deadly shot and is ruthless. The outlaws have already thrown Brennan's friend and his son down the well and it looks like Brennan and the Mims are next.
Doretta is a good person, but her husband is a bum who just married her for her money. When Usher learns from the husband that Doretta is the daughter of a rich copper-mine owner, he decides to hold her for ransom. Willard is only too happy to leave to get the ransom.

Like in the other Ranown films we again run in to a woman who is too good for the man she is with. Our hero seems like a much better match for her and they both know it.
Also, as in the other Ranown movies, the villain and the hero form a sort of respectful friendship. There is a code that they both seem to understand. They are men. They are the bull and the bullfighter. They are not like the men around them, who are either weak or misfits. Usher asks Brennan if he has a woman on his place and Brennan tells him he doesn't. Usher says: "It ain't right for a man to be alone." Brennan, in classic Ranown, says: 'They say that."

After Willard comes back with news of the ransom, he is quickly disposed of, to the regret of no one. Usher, with the strange sense of honor that the Ranown villains had, couldn't stand that Mims was selling his wife. Even Doretta comes to know she is better off without him. Brennan and Doretta start planning to save themselves from being shot the next day. In the meantime, Doretta and Brennan form an attachment for each other.

Usher:  Suppose you be wonderin why we be keep you around.
Brennan:  Am I?
Usher:  Plain face truth is that I like you Brennan. Not many men I can say that about.
Brennan:  Can you say it about you?
Usher:  There was them when they did. Yeah. Time was  I was looked on with a fair amount of respect where I come from.

When Usher goes off to collect the ransom, Brennan outsmarts and then kills off Billy Jack.

Chink hears the gunshot and comes back and Brennan kills him. It is now just Brennan and Usher. When Usher returns Brennan gets the drop on him. Usher could have escaped, Brennan won't shoot him in the back. But Usher can't run away, he must turn back and charge. The matador must kill the bull, even if he doesn't want to.


Brennan, to the weeping Doretta, after he has killed the three murderous kidnappers, "Come on now. It's gonna be a nice day" and  Brennan and Doretta ride back to Contention together with their arms around each other.